On Monday, we relayed news from France that Tottenham are interested in Paris Saint-Germain’s Adrien Rabiot and Mauricio Pochettino’s side have held some kind of talks with his entourage.

L’Equipe explains the player’s situation in today’s edition and they claim, as he delays signing a new deal with the Ligue 1 winners, other clubs across Europe continue to monitor his situation, and Chelsea are ‘on the lookout’ for Rabiot, along with Juventus and Bayern Munich.

There is a possibility that Thomas Tuchel could make him sit on the bench so that he is forced to sign an extension, but the situation is more complicated than expected because the German coach lacks more options in his position.

The Ligue 1 winners’ president, Nasser Al-Khelaifi, is personally leading the contract negotiations with the midfielder, but the France international wants to wait and see how things progress before committing his future at Parc des Princes. 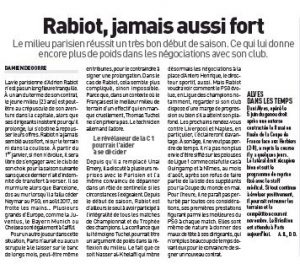 If PSG fails to tie him down to a new deal before the end of this calendar year, he will be free to sign a pre-contract with any club outside France from January 2019.

Chelsea would have to beat Tottenham and others interested clubs, it’s not an easy one.