Constantly with a big smile on his face, the young Belgian striker has put up with a lot over the past year and a half at Stamford Bridge, as Antonio Conte refused to give him the chance he quite clearly deserved to score goals at Chelsea.

Eventually, enough was enough, and when the Blues decided to spend more money on their front line after shelling out £60m in the summer for Alvaro Morata by giving Arsenal just under £20m for Olivier Giroud, Batshuayi got a loan move to Borussia Dortmund.

Scoring two on his debut, the 24-year-old added another at the weekend, helping the Bundesliga club win their past two games. 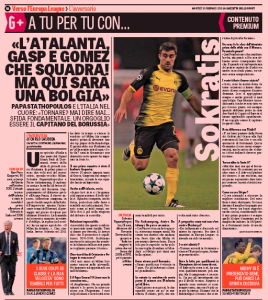 Speaking to Gazzetta dello Sport, his new teammate, Sokratis Papastathopoulos, confirmed what we felt was already happening, and that’s the fact Batshuayi is settling in quite nicely in Germany.

He said: “With Pierre (Aubameyang), we had a good rapport. We’ll always be friends, but it was his destiny to leave. I must say that Michy has presented himself really well. And not only with his flips (when he scores): he knows how to score and his desire to make the World Cup with Belgium can give us a nice boost”.

Determined to be on that plane to Russia, the Chelsea loanee is having to show Roberto Martinez why he should be picked ahead of the likes of Christian Benteke or Divock Origi, and he’s doing just that at Dortmund.

May it carry on.