After Manchester United decided to sign Romelu Lukaku over Alvaro Morata, the latter left Real Madrid for the second time and joined Chelsea in 2017.

The Spain international struggled under Antonio Conte in his debut season with the Blues and it continued even after Maurizio Sarri arrived at Stamford Bridge.

In the winter transfer window, the Blues allowed the striker to join Atletico Madrid on an 18-month loan deal, while they signed Gonzalo Higuaín on loan from Juventus.

Morata has impressed for Diego Simeone’s side, scoring five goals and registering one assist in 10 league appearances.

AS now claims the frontman is enjoying life with Los Rojiblancos and has ‘no plans to return to Chelsea’ because he feels ‘very happy’ to have signed for Atletico.

The former Juventus man is enjoying his game and has become an important player under the guidance of Simeone, which is why he doesn’t want to hear anything to do with a return to Chelsea.

If the Premier League club wants their player back, they have to inform Atletico between July 1st and 15th, but Atletico could then exercise the purchase option. 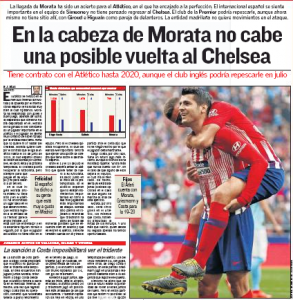 AS explain Morata only thinks of Atletico and the La Liga club also want to avoid any movements in the summer for their attacking players.

Player’s future ‘far from Brighton’ as ‘distance on the figures’ of...