Monday’s edition of Marca has a big article on the future of Saul Niguez, with it stated the Premier League is the solution for his Atletico Madrid exit.

The first part of Marca’s article concentrates on Manchester United, as it’s reported the Old Trafford club is the most likely destination for the midfielder.

The Spanish newspaper states both Chelsea and Liverpool have been in contact with Saul’s agents over a potential summer move.

Thomas Tuchel is said to be behind the interest from the Champions League winners, and there’s not a great deal more on Liverpool’s interest, although the Reds are also linked by AS on Monday. 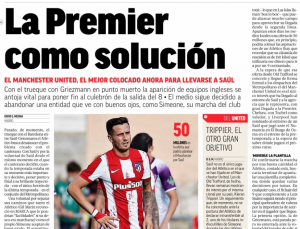 Saul has dropped down the pecking order at Atletico, with the arrival of Rodrigo de Paul underlining that further.

Marca mention English claims of a €50m offer from Manchester United, and although they make it clear this hasn’t arrived at Atletico and they’d be waiting for it, they state such a figure could be enough.