Corriere dello Sport had a big article in their Sunday Naples edition on the future of Kalidou Koulibaly and the interest he’s been building around Europe.

Chelsea fans will know the Napoli player, he’s been linked with the club repeatedly over the past few years with multiple claims of offers being made and rejected by the Serie A club.

Having reportedly already made a €58m offer for the player, which was rejected, there was a claim in December that Chelsea were already planning a swoop for the summer window.

Last month saw another claim from Italy that Chelsea will return for another try in the next window, and the reports aren’t going anywhere. 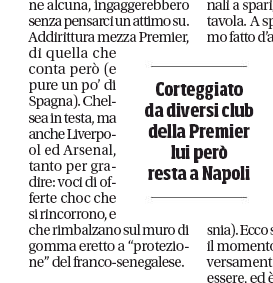 Corriere dello Sport say Arsenal and Liverpool are both keen on the central defender, but it’s ‘Chelsea in the lead’.

Despite that, it’s believed Koulibaly is very happy where he is, playing for Napoli and living in Naples, so any offer would not only have to be good enough persuade the club, but also the player as well.