Chelsea have only held ‘informal contacts’ with Barcelona regarding Sergino Dest, despite their need for a full-back to replace Ben Chilwell.

The England man has been ruled out for the rest of the season, leaving Chelsea short at left-wing back and looking for an alternative.

They are trying to bring Emerson Palmieri back from his loan deal at Lyon, and Kenedy has also returned from a loan spell, but they continue to be linked with full-backs around Europe.

One of those is Dest, who Barcelona are keen to get rid of so they can raise funds and free up space on their salary cap to give Xavi the signings he wants.

Several reports have indicated that there is interest from Chelsea and Sport confirm that is the case and they are ‘keeping an eye’ on the American.

However, to date, their ‘interest’ has not ‘gone beyond informal contacts’ with Barcelona to know what the player’s situation is. In other words, there is nothing serious going on for now. 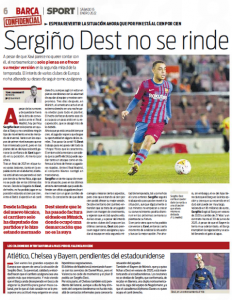 Even if that changes, they will probably have to work to convince Dest, who is ‘not giving up’ on his time at the Nou Camp just yet.

Despite Xavi not counting on him and Barcelona making it clear they want rid, he is only thinking about proving himself in the second half of the season.

He ‘does not consider’ leaving Barcelona this month despite the interest from Chelsea and several other ‘top European teams’.

The player feels capable of reversing his situation and proving he can be an important player under Xavi, suggesting that if Chelsea do decide to make a move, they’ll have to work hard to convince Dest that a move to Stamford Bridge is the right one for him.