Since Frank Lampard took over at Stamford Bridge, many changes have taken place, mostly based around an emphasis on playing younger players and bringing through the talent.

However, another big change, slightly more recent, has been the decision to drop Kepa Arrizabalaga in favour of Willy Caballero after the Spaniard made some costly mistakes.

It has led many to believe the former Athletic Bilbao goalkeeper will be sold in the summer, which means he would need replacing.

A few names have been mentioned, like Lille’s Mike Maignan, and now we have a story emerging in Italy that Chelsea are interested in Udinese’s Juan Musso. 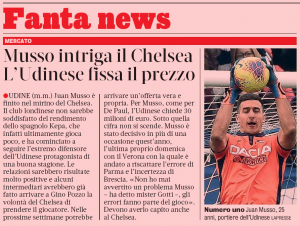 According to Gazzetta dello Sport, intermediaries have already brought the Premier League club’s intention of buying the player to Gino Pozzo’s attention, and there’s a belief a ‘real and true offer’ could arrive in the next few weeks.

Udinese’s stance in the matter is simple: they want €30m for the Argentina international, the same price as Rodrigo De Paul.

Chelsea now know where things stand, and after their surprise post January move for Hakim Ziyech, we might see another one be done in the near future.