So when speaking of the success the player is having in Lisbon, the outlet mentioned a few clubs who have be interested in him, having never previously named Chelsea.

Now it turns out that when covering that interview today, Portuguese newspaper Record adds the Blues to the race for the 22-year-old.

Their story says Chelsea are now alongside Atletico Madrid, Inter Milan, Milan and Paris Saint-Germain in the list of those who are keen in the signing.

It’s interesting to see Record throwing the Stamford Bridge side to the battle like this, seemingly off their own back, because when they mention Manchester City, they say the claims of a chase from Pep Guardiola’s side is something that comes from the English press.

The newspaper writes that Benfica’s plan for now is to let Darwin’s market value go up.

The Eagles turned down a couple of offers from Brighton & Hove Albion in the summer, one of them of €32m, and have the player well protected with a release clause of €150m. 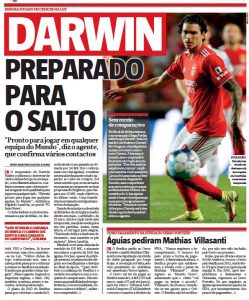 Speaking to FC Inter News, the striker’s agent claimed to be pretty calm about the situation, as the player drew huge attention following his brace against Barcelona last week.

“Darwin is ready to play in any team on the globe,” Lasalvia told FC Inter News.

“Various top-level teams have contacted us, but for the moment the head is on continuing and growing with Benfica and with the Uruguayan national team: this is how important things will come.”