Just like the Portuguese media was confident that Sporting were selling Bruno Fernandes a week ago, they were also sure that Benfica were signing Bruno Guimarães.

The Eagles were said to be close to a deal with Athletico Paranense so they could bring the Brazilian midfielder to Lisbon in the January transfer window.

But the negotiations have stalled, and according to newspaper O Jogo, it may be down to Arsenal and Chelsea.

The newspaper claims that along with Lyon, the Premier League sides have recently shown up, and that’s made Athletico’s talks with Benfica ‘sleep’ for a while. 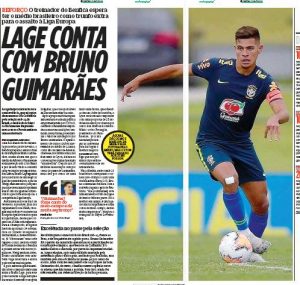 These claims are interesting because Arsenal have indeed been linked to the midfielder lately, with claims of a meeting with his agents last weekend.

But it’s been a while since Chelsea were last said to be following Bruno, even though they were one of the first said to be interested in him.

Benfica have made a bid of €20m to sign the player, and Athletico have been fighting to get a little more money, with the Eagles about to make their second bid. So in case Arsenal or Chelsea really want the Brazilian talent, they better know the Lisbon giants are going seriously for him.