Loaning Saúl Ñiguez from Atlético Madrid this summer, Chelsea, via their manager Thomas Tuchel, clearly felt the need to bring in a new midfielder.

The Blues have an option to make the move permanent if they so wish, yet the limited appearances by the Spaniard so far suggest he might only be a stop gap for someone else going forward, with claims the German manager isn’t keeping his original ‘promise’.

If Tuttosport are to be believed, that man could be Aurélien Tchouaméni, as the Italian newspaper claim the Monaco star is of interest to Chelsea.

Focusing on Juventus’ attempts to coax the 21-year-old into joining them, they explain the Serie A side have been trying to get a head start ‘for more than a month’, moving ‘with great concreteness to anticipate the competition of Chelsea and Liverpool’.

With Jürgen Klopp’s side still to replace Georginio Wijnaldum, their inclusion certainly makes sense, and with Tuttosport claiming that AS Monaco value him at €35-40m, so does Chelsea’s. 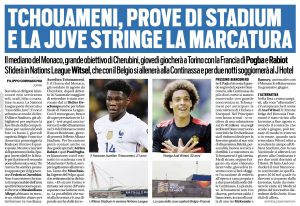 After all, we are talking about a very affordable price for a player who has recently made his way into Didier Deschamps’ plans for the France national team, and one followed by three Champions League clubs.

It remains to be seen how concrete Chelsea’s pursuit of Tchouaméni is compared to Juventus’, but with the Italians doing their best to win the race, there are clear suggestions the Blues are doing their own thing down their end.