Later that day, a source told Sport Witness a move to Old Trafford or the west London club is a ‘possibility’ for the Atlético Madrid player.

Journalist Antonio Ruiz then told Deportes COPE United and Thomas Tuchel’s side were the ‘top contenders’ to acquire the midfielder’s services.

Which now takes us to Wednesday, where Ruiz’s claims are further backed up by Marca, who say both Chelsea and United ‘insist’ on signing the Spaniard, as he could leave the Wanda Metropolitano in the last days of the window.

In the absence of a formal offer that satisfies the La Liga winners, they will have to replicate the formula used to allow Álvaro Morata move to Juventus last summer.

The Turin club took the striker on a temporary deal that includes €10m up front, with the fee needing to be paid to renew the loan while Juve also have to pay his full wages.

Diego Simeone’s side want to use a similar formula in order to allow Saúl to move to the Premier League. 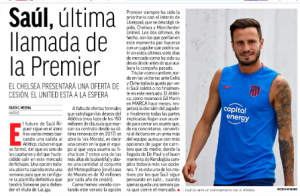 While the Old Trafford club are ‘waiting’, the newspaper states the Champions League winners ‘will present an offer’ to take the player on a loan deal.

If a deal doesn’t materialse, Marca say Saúl will have more options to play as a carrilero on the left than in the centre of midfield.