Last summer Seri was repeatedly linked with a move to Barcelona but the deal fell through, with the player himself later speaking about how disappointed it made him.

Remaining with Nice and living the South of France lifestyle hasn’t exactly been a chore for Seri but he’s doubly determined to try and grasp a dream move this summer.

The player has a private agreement with Nice which can see him leave for €40m this summer, and, as long as Nice stick to it, that’s an increasingly reasonable sum in the current market.

Leaving Nice is very likely for Seri this summer, it’s just a question of where.

A central midfielder, known more for work on the defensive side but a good all-rounder, Seri has been the subject of initial contact from Chelsea, report L’Equipe. 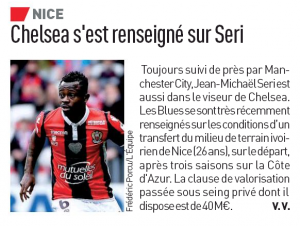 Chelsea are said to have ‘learned about the conditions for a transfer’ for the 26 year old, which may sound a little odd given everyone who needs to know is surely aware it’s going to be a €40m deal.

Manchester City are referenced in the article, as having been following Seri for some time, and it’s likely Chelsea would face competition.