It’s quite difficult to believe that Chelsea would be interested in Alisson Becker considering they already have Thibaut Courtois in goal.

However, the Italian press seem adamant that the Blues are keen on bringing the Brazilian shot stopper to Stamford Bridge, even if AS Roma are asking for a fee starting at around €70m for their new star.

Courtois’ desire to return to Spain at some point in his career has to be one of the worst kept secrets in football these days, and if Real Madrid come knocking, this could be the summer where he gets his wish granted.

The Spanish giants are also interested in Alisson, but, as things stand, Il Tempo believe Chelsea could have the upper hand, having offered the Brazil international more money than the Champions League champions. 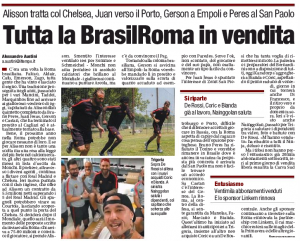 After a ‘new meeting’ with the ‘various agents’ working on a possible deal, the Premier League side are said to have offered the goalkeeper €5.5m/year post tax compared to Real Madrid’s €5m.

This transfer, as well as Courtois’ potential exit, would obviously take place after the World Cup comes to an end, with both goalkeepers set to play each on Friday evening.

When that time comes, it will ‘the moment’ to send Roma the offer of €75-80m required to agree to a sale.

Until Courtois leaves, we can’t see this happening, and there’s been no suggestions Real Madrid have turned their attention to the Belgian just yet.

Perhaps everything will accelerate once everyone returns from Russia.