One way or another, we’ll know whether Bernard is a Chelsea player or not by Tuesday.

At least, that’s what Gazzetta dello Sport are claiming this Friday as they look at the Brazilian’s situation, as he continues to ask his agents for patience, desperate to play for Milan.

With the Gonzalo Higuain and Mattia Caldara deals now out of the way, the Serie A outfit can focus their attention on Bernard, but Chelsea aren’t going to hang around forever hoping that a deal taking him to Italy falls through.

The Italian newspaper state the Blues have given him an ultimatum: sign the contract with us by Tuesday, or you can forget about playing at Stamford Bridge.

This backs up claims from elsewhere on Thursday. 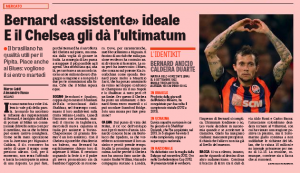 Should Milan meet his demands, Bernard would move to San Siro in a heartbeat, having always dreamed of playing in Italy thanks to his father, who predicted he’d play for the rossoneri when the forward was just a child.

Tuesday it is, then.

Hopefully we’ll get an answer before that, but the way things go in football, you never know.