Amid their constant struggles to try and keep hold of both Chris Smalling and Henrikh Mkhitaryan, there is some good news for AS Roma in the shape of Pedro.

The Chelsea forward is out of contract at the end of the season, and despite efforts from Al Sadd in Qatar where his former teammate Xavi is the manager, the Spaniard wants to stay in Europe for now.

Roma, who have already relaunched the careers of the aforementioned Smalling and Mkhitaryan, have thrown themselves after the winger, whom Paulo Fonseca sees as an ideal recruit to bring experience and quality to his young side.

Even better, Corriere dello Sport are reporting Pedro is willing to wait until the end of May, a time when the director of football Gianluca Petrachi will have ‘a few assurances’ about his own future, seemingly conscious that the current world situation isn’t exactly ideal for clubs and their staff. 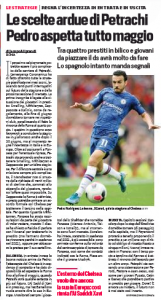 This suggests there is an interest from the former Barcelona forward in moving to the Serie A club, a league renowned for allowing veterans to shine once more, before retiring to somewhere more exotic.

That’s all they have for now, but it’s certainly progress from both Pedro and Roma, and there is currently no rush in having to make a decision since we still don’t know what’s happening with football in general.