Home Premier League Chelsea Chelsea ‘forcing’ for player before end of month – His entourage are...
SHARE

Chelsea are continuing their efforts to bring full-back Emerson back to the club from his loan spell at Lyon.

That’s according to L’Equipe, who say the Blues are ‘forcing’ the issue with the defender, who the French side are very much keen to keep.

The Blues need a full-back this month after losing Ben Chilwell to a long-term injury and, rather than spending on someone new, are trying to bring Emerson back early from his loan spell in France.

So far, they have had little success, but L’Equipe say they are ‘forcing their way back into the fold’ regarding the defender.

They are ‘pushing’ to get him back to Stamford Bridge  and have been doing so for a few days now, despite resistance from Jean-Michel Aulas and co.

They have ‘rejected all approaches’ so far, even the latest, which included ‘comfortable financial compensation’ from Chelsea.

Thomas Tuchel’s side were keen to include a recall option in the loan deal in the summer, but Lyon resisted, and it’s worked out in their favour this month. 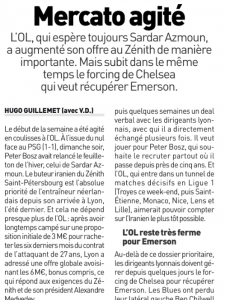 The German is a big fan of Emerson and wants him back to cover the loss of Chilwell, but it will ultimately depend on the player.

He and his entourage are tempted by a return to Chelsea, and their offer has ‘made him think twice’, but he has said privately that he is ready to play the full season with Lyon, thus rejecting an early return to Stamford Bridge.