With the Olivier Giroud problem seemingly sorted, Chelsea can now move onto offloading more of the deadweight at the club, which includes Tiemoué Bakayoko.

The midfielder has only played one season at Stamford Bridge since his expensive move from AS Monaco, with loan deals at Milan, the aforementioned principality club and Napoli all taking place since then.

The latter started off well but didn’t finish on the best of terms, and yet they could still want him around next year since they have a new manager.

Luciano Spalletti has taken over from Gennaro Gattuso, and Gazzetta dello Sport explain that the former AS Roma man has since ‘asked Aurelio De Laurentiis to confirm Bakayoko’.

This means that on top of Milan wanting to reunite with the Chelsea midfielder, Napoli are also on the case, potentially causing a tug of war for a player who doesn’t have a future at Stamford Bridge. 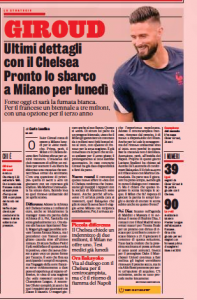 His contract in London expires next year, which is why the Blues are trying to extend him by another, but that hasn’t taken place yet, with their unilateral clause only available from January onwards.

The question Gazzetta ask is ‘what do Milan do?’

Do they simply ‘play the game for a long time, or do they decide to enter the scene immediately on this front too’, much like they did with Giroud?

We’ll have to wait and see, but this is certainly a scenario Chelsea will enjoy, as two clubs wanting a player is far better than just one, or even none.