Chelsea are in a ‘three-way battle’ for Erling Haaland, with Romelu Lukaku’s recent comments throwing them back into the mix for the Borussia Dortmund star.

That’s according to SportBILD, who say the ‘dispute’ between Chelsea and Lukaku could change things around Haaland ‘abruptly’.

Lukaku recently discussed his dissatisfaction at life at Stamford Bridge and his love for Inter Milan, ‘explosive statements’ that are being closely followed by those in charge at Dortmund.

Until this point, Chelsea were not considered a serious candidate in the battle for Haaland because they have Lukaku, but that could now change.

The striker’s comments have not gone down well, particularly because he criticised Thomas Tuchel’s tactics, something that is seen as an ‘insult to his majesty’.

Anyone who knows Tuchel knows that he does not tolerate criticism of his system and style of play, and it’s hard to see Lukaku being treated any differently.

That’s bad news for Dortmund, particularly because Tuchel revealed his love for Haaland in an interview with SportBILD last year.

It’s ‘no secret’ that Chelsea have the ‘financial means’ to pay Haaland’s release clause and if Roman Abramovich ‘opens the money box’ a salary of over €30m is ‘conceivable’. 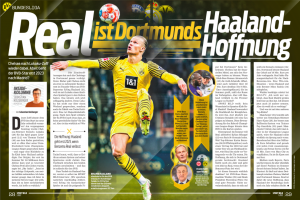 The big issue is Haaland wants a move to Real Madrid, which is his ‘dream destination’, and it appeals to him to build a legacy like Cristiano Ronaldo did.

Madrid want to wait a year, though, as they’re targeting Kylian Mbappé, and Karim Benzema’s contract doesn’t expire until next year.

The ‘hope’ is that they could convince Haaland to spend another year in Germany and then go to the Bernabeu in 2023, something which is conceivable as BVB boss Hans-Joachim Watzke and Florentino Perez are good friends.

The rest of the competition is also falling away as Manchester City want Harry Kane, Barcelona don’t have the money and Bayern, PSG, and Liverpool don’t need a striker.

That means there is a ‘three-way battle’ between Chelsea, Madrid and Dortmund for Haaland’s signature, with Lukaku’s comments putting the Blues back in the mix.