When multiple Italian newspapers push a similar story, there tends to be a smidge of truth in it, which is why we might have to start taking the idea of Chelsea being interested in Andrea Belotti seriously.

It’s been sporadically mentioned over the past couple of weeks, and La Repubblica on Wednesday are the latest to bring it forward in an article looking at the player’s situation in Turin.

Out of contract in 2022, the Italy international has yet to renew with the Serie A side, and doesn’t particularly seem to want to, either, which is attracting interest from all over Europe, with Chelsea and Everton the two mentioned from the Premier League.

There are two scenarios currently playing out in front of the player, and they both depend on where Torino end the season.

Urbano Cairo’s side are currently 17th in Serie A, five points ahead of 18th with a game in hand, meaning there is some distance from the relegation zone, although we all know how quickly that can change with a couple of bad results.

Should Torino stay up, Belotti ‘will be able to decide his own future after having evaluated the team’s relaunch program’ ahead of the new campaign.

However, were they to get relegated to Serie B, the goodbye would be ‘inevitable’.

Either way, his ‘destiny will be decided at the end of the season and after the outcome of the Euros’, where he hopes to be a protagonist alongside Ciro Immobile. 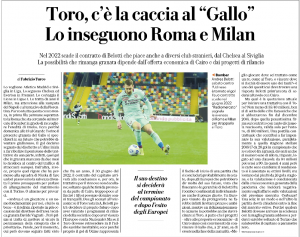 What about the price? Previous reports stated the Chelsea and now Everton target could be available at around €25m, although La Repubblica reckon it’ll be a bit more than that, with the fee quoted at ‘no less than €35-40m’.

That’s affordable for both the Blues and the Toffees, but it remains to be seen if that’s a fee they will be willing to pay come the summer.

After all, Chelsea have the likes of Olivier Giroud and Tammy Abraham to deal with first, while Everton need to decide what they want to do with Moise Kean, who will soon be returning from his loan at Paris Saint-Germain.

While €35-40m may not seem a lot in previous markets, it is in this mid-Covid-19 induced financial crisis, and we could see clubs gamble more and more on what they currently have instead of opening chequebooks to spend money willy nilly at a time when purses are tight in hope something sticks.