The intention is to protect both talents from moves in the transfer market, and in case of a sale, they must go for an amount which the Eagles can’t refuse.

Now there’s a specific club who are linked to Weigl, and that’s Chelsea.

O Jogo recalls they’ve recently reported the Blues’ interest in the German player, claiming the Stamford Bridge side have already ‘established contacts’ for his signing. 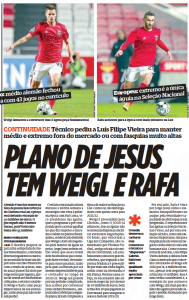 Following Chelsea’s interest, it’s said Benfica will not negotiate the player’s sale for less than €30m. They’d like to make some profit after spending €20m on his signing two years ago.

The Eagles got Weigl from Borussia Dortmund, where the midfielder had been managed by Thomas Tuchel. That’s where the Blues’ chase is apparently coming from.

The German player became an important player for Benfica this season, and is protected by a release clause of €100m.