Antonio Conte is still the manager of Chelsea Football Club, but his long term future is likely to lie away from Stamford Bridge. Despite helping the Blues win the FA Cup, the Italian coach will be shown the exit door once the west London club can agree a deal with his successor.

Maurizio Sarri was replaced by Carlo Ancelotti as Napoli manager, and the former was heavily linked to replace Conte at Chelsea. However, the Premier League club’s interest in him has cooled off as he is still under contract at Napoli.

Former Barcelona manager Luis Enrique was identified as another candidate, while Laurent Blanc is also in the list of candidates to replace Conte at the English capital club. Corriere dello Sport reported on June 4th that ‘Blanc solution’ is moving forward.

France Football reported it first and it was once again mentioned by RMC Sport on Tuesday that Chelsea director Marina Granovskaia had a meeting with Blanc. Today’s edition of the French newspaper L’Equipe claims the two had met for the first time in Paris on April 19th. Another meeting could be scheduled between Granovskaia and the ex-Manchester United defender for the Chelsea job.

Blanc was asked to step down from his position at Paris Saint-Germain in 2016. Since his exit from Parc des Princes, it is the first time that the former France coach is in advanced talks with a club. 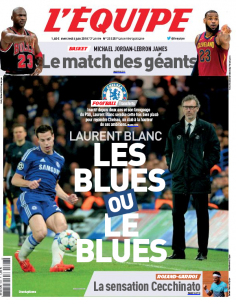 Alain Migliaccio managed the Frenchman during his playing career and the former joined Jean-Pierre Bernes to manage Blanc during his managerial career. The 52-year-old has decided to cut ties with both and L’Equipe reports he is likely to be managed by Kia Joorabchian.

Joorabchian has close ties with Chelsea and Granovskaia and this could help Blanc join the FA Cup winners. If he accepts to join the English outfit, Joorabchian will represent Blanc.