Chelsea’s César Azpilicueta and Marcos Alonso are both ‘seduced by the idea’ of playing for Barcelona.

The Blues duo are on the front page of Mundo Deportivo, with ‘want to come’ written in bold.

Within the report, it’s said the two Chelsea defenders are on the La Liga side’s ‘agenda’ for the upcoming window.

The right-back and the left-back have their contracts at Stamford Bridge expiring in 2023, but both want to swap Thomas Tuchel’s side for the Catalan club in the summer.

Regarding Azpilicueta, the newspaper states the La Liga side are ‘very clear that they want to try to sign him’.

He is a ‘very interesting’ player for the Blaugrana, considering his ability to play across multiple positions and also the experience of playing at the highest level. 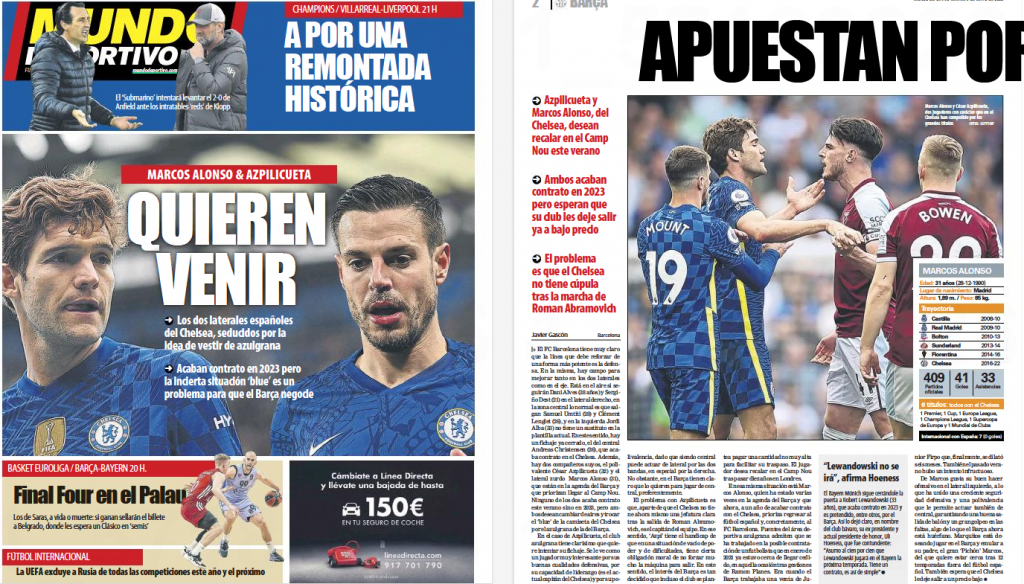 Roman Abramovich has announced his decision to sell Chelsea, meaning this, and the fact Azpilicueta is the club’s captain, hinder the Spaniard from leaving the west London club.

Mundo suggests he has ‘certain moral obligation’ not to force a way out of the club due to their current situation.

Azpilicueta’s wish is to leave Stamford Bridge and make a switch to the Camp Nou. Barca, for their part, are ready to pay a small fee to the Premier League side to take the fullback away from the current club.

Alonso has over a year left on his contract. He also wants to leave Chelsea and return to Spain, especially to Barcelona, in the next window.

Mundo states the former Fiorentina man is ‘looking forward to playing for Barcelona’, and he remains hopeful the FIFA Club World Cup winners will allow him to leave for a ‘low price’.

Barcelona have both Azpilicueta and Alonso on their agenda and the duo are ‘seduced’ by the idea of arriving at the Camp Nou.

Xavi’s side, however, will have to negotiate with Chelsea and that, for now, ‘is a problem’ for them.