When Chelsea take on Atlético Madrid in the Champions League this evening, there will be more than one point of interest in the game.

The two managers, the very different styles and the star players on the pitch, should all make for a fascinating contest.

One big point to keep an eye will be the goalkeepers, with Chelsea having long had an interest in Atlético’s Jan Oblak, a goalkeeper most consider among the best in the world.

Marca elect to look at that today and detail how, before Kepa Arrizabalaga’s big-money move to Stamford Bridge, the Slovenian was the only man the Blues had eyes for.

The newspaper explains Chelsea have had ‘dreams’ of signing Oblak before paying €80m for Kepa, but their interest, which has manifested into a genuine effort on ‘several occasions’.

Their first attempt at signing him came in 2018, when they ‘considered’ paying Oblak’s €100m release clause but instead opted for Kepa, who ended up leaving Athletic Club Bilbao for €80m.

That move, though, only happened because of Zinedine Zidane, who ‘thwarted his arrival’ at Real Madrid, despite the two parties having already agreed on a move.

Chelsea’s second attempt for Oblak came last year, with the club desperate to replace Kepa after a series of high profile errors.

That effort did not result in a formal offer but would have seen them paying €120m for the Slovenian, who has continued to impress for Atlético and thus increased his value.

It’s explained that both approaches were effectively dismissed out of hand thanks to the goalkeeper’s relationship with the club, with both knowing that they are ‘facing the ideal 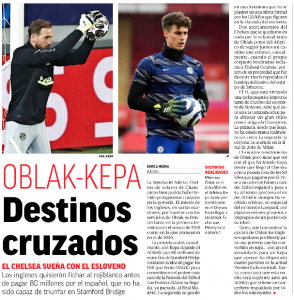 campaign’ that could end up in major silverware.

That left Chelsea looking elsewhere to replace Kepa, with the Spaniard no more than a substitute courtesy of the ‘gross errors unbecoming of a goalkeeper of his level’.

Indeed, the Spaniard is likely to be a substitute tonight, watching Oblak start in goal for Atlético and wondering what it is like to be him, ‘a goalkeeper backed by all sides’.