Philippe Coutinho is on loan at Bayern Munich and the Bavarian club have decided against making his transfer permanent in the summer.

Since then, reports coming out of the Catalan media have been trying to push the Barcelona owned player towards the Premier League.

The Brazil international has been linked with Chelsea, Arsenal, Tottenham Hotspur and Leicester City over the last few weeks. These claims have also been made by the British press.

Saturday’s edition of Marca claims the former Liverpool man ‘wants to return to England’ in the next transfer window.

They once again relay claims made in Spain and England about the rumours talking about Chelsea and other Premier League clubs’ interest in the 27-year-old.

The newspaper states, ‘the truth is that none [of the clubs] has made any type of call or approach, officially or unofficially’.

In addition to this, no club has come forward and formally registered their interest in the player. 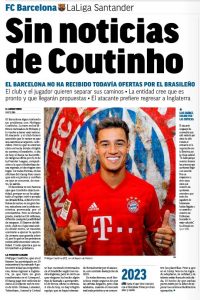 If Marca are to be believed then none of Chelsea, Arsenal, Spurs, Leicester or Manchester United haven’t made any movements to sign Coutinho.

The report, however, adds those in charge at Barcelona are of the belief there will be offers for Coutinho and both parties have the desire to go their separate ways in the summer.