It’s claimed that Lazio would be keen on signing the 26-year-old in case one of their fullbacks leave in the summer.

Tuttosport says that Chelsea aren’t making his departure very easy, and would demand at least €15m to let the player go.

They write that the player’s entourage has recently met the Blues, and his father has made it clear that Lazio would be a nice destination for him. 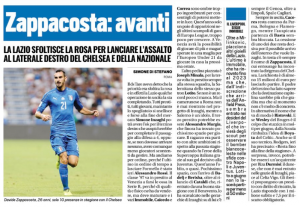 However, Tuttosport claims that there’s ‘nothing very concrete’ about the story now, despite having his name in the headline and a big picture of him. Typical stuff from the Turin newspaper.

Zappacosta was signed by Chelsea from Torino in 2017 on a €25m deal, but could never hold a place in the Blues’ starting team. He has 10 appearances for the club this season, but only two of them were made in the Premier League.