PSG parted ways with Thomas Tuchel in December 2020, with the German manager falling out, quite publicly, with sporting director Leonardo.

The Brazilian had returned to Paris to try and help the French club with their ultimate aim, winning the Champions League. Mauricio Pochettino, who had been without a job since his Tottenham exit, took on the vacancy, and PSG ended the season with the Coupe de France, clearly not the return they were hoping for.

Meanwhile, Tuchel took over at Chelsea in January 2021, and less than six months later he won the Champions League with the Blues, which must sting for Leonardo and PSG.

Pochettino now needs to follow him to completely fulfil his brief with the Ligue 1 side, because for PSG the domestic title is simply not enough.

The former Tottenham manager has been speaking to L’Equipe, for an interview published in their Friday edition.

As part of their questioning, the French newspaper put the following to the manager: ‘In the Champions League, PSG are one of the most exposed teams, which has the most difficulty protecting themselves, unlike Manchester City or Chelsea. Are you worried about this?’

Pochettino responded: “Chelsea are a defensive team, playing the transition and the block. We signed attacking full-backs, Hakimi and Nuno Mendes. The club have the 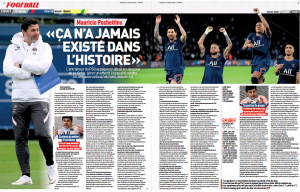 ambition of an attacking game. You have to find a defensive balance that allows you to manage the ball well in order to attack well. There is also the recovery: how you organise yourself with a loss of ball, how you recover under pressure, etc.

“It’s true, we concede a lot of shots, but that’s one of the characteristics of attacking teams, to have full-backs who go up, to project themselves into the opposing half… We are in the phase of understanding.”

Thomas Tuchel will look at his shiny Champions League medal, and won’t be bothered in the slightest.