Since he’s out with a ruptured ACL, the reports about Davide Zappacosta’s loan at AS Roma from Chelsea are few and far between.

Normally, it’s about the Italian’s chances about potentially returning to Stamford Bridge in January, as his loan is initially for the first half of the season.

Chelsea can then either choose to extend his loan by another six months or bring him back (since they technically still can’t sign anyone in January), and there has been some debate over whether Roma should just let him return and focus on another reinforcement in January instead to back up Alessandro Florenzi.

Well, if Il Tempo are to be believed, that might be best for everyone, because the Italian newspaper say Zappacosta ‘won’t be ready before April’, which leaves him with very little time to actually contribute to anything of note for the Serie A side. 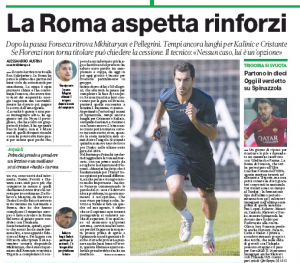 Earlier on this month, it was stated that Chelsea would decide what to do with their full-back ‘in the coming weeks’, and if that news about his return is true, they might as well bring him back to Stamford Bridge to have him recover with their medical team.