Home Premier League Chelsea Chelsea ‘deal intensively’ for star’s signing – Club have ‘not yet given...
SHARE

Chelsea invested in excess of €100m when signing Romelu Lukaku from Inter Milan in the last transfer window.

The Belgium has five goals and an assist from 16 matches in all competitions. He ended his three-month goal drought in his side’s 3-3 draw against Zenit St. Petersburg on December 8th.

Thomas Tuchel’s side were keen on bringing Erling Haaland to Stamford Bridge before taking Lukaku. The Blues are still interested in the Borussia Dortmund star, if a report from this week’s edition of SportBild is to believed.

It’s claimed that Chelsea, Real Madrid, Barcelona and Bayern Munich are the sides who ‘deal intensively’ with the star striker. Despite several suitors, BVB have ‘not yet given up’ on retaining the Norway international beyond this season.

Dortmund chief Hans-Joachim Watzke has already held talks with Mino Raiola. The super-agent, along with the player’s father, Alf-Inge Håland, is set to have another meeting with the Bundesliga side in January, to discuss the frontman’s future.

The German club want to offer Haaland a new contract, which will include a salary worth €16m per year, to retain him at least until 2023.

His deal with Nike, worth €1m annually, expires this month, and Puma, who are also Dortmund’s kit supplier, want to bring the player on board by offering a deal worth €8m per year. This would make the overall package around €24m.

It’s still not clear what Haaland will decide and his employer, ideally, would want to have 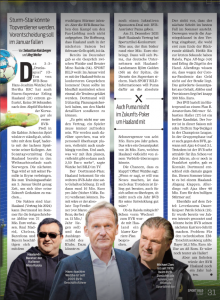 more clarity, when they hold talks with his camp next month.

Chelsea are in the picture to take the goalscoring attacker. The report says the total cost of the operation, which includes a transfer fee of €75m, salary and agent commission, will be just under €300m.

It remains to be seen whether the Champions League winners will be open to investing this figure for Haaland, just a year after signing Lukaku.