With Cristiano Ronaldo now officially a Juventus player, medical and all, it’s time for the Serie A champions to get rid of some of the extra weight around the club, and that could all start with Gonzalo Higuain.

The Argentinian striker appears to be the likeliest to lose his spot in Max Allegri’s team following the Portuguese superstar’s arrival, and Chelsea are, and have been for some time, interested.

We’ll start off with Gazzetta dello Sport, who explain a Higuain-Ronaldo partnership is ‘anything but guaranteed’ in Turin, and that Juventus have been ‘waiting for days’ for the Blues to put in an offer for both the forward and Daniele Rugani.

Over at Tuttosport, however, things appear to be far more advanced, as they believe a deal ‘will be €60m’, and everything could be closed as early as tomorrow (Wednesday). 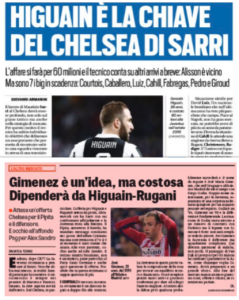 That’s pretty much all they say, but they firmly believe Roman Abramovich is ready to do most things Maurizio Sarri asks him to, with many of the current Chelsea squad finding other clubs.

If the Italian media are to be believed, we’re in for quite the revolution at Stamford Bridge, and it could all kick off with the arrival of a 30-year-old goalscorer.