Monday’s edition of Corriere dello Sport reports that Jorginho is a step closer to Juventus than Barcelona’s Arthur.

The latter has been linked repeatedly with a move to Serie A in recent weeks, but it’s not thought he’s especially keen on leaving Barca this summer. Catalan newspapers have been reporting his reluctance, despite Barca considering his exit, and now his mother has got involved.

Taking to social media, she posted a picture of her son playing for Barcelona, and made clear he’s happy where he is.

Therefore, eyes turn back towards the Chelsea player, and Corriere dello Sport suggests there’s something of a transfer dance going on right now between the Blues and Juventus. 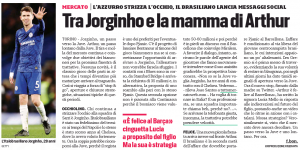 Contacts between the two clubs ‘are ongoing’, and it’s claimed Chelsea have set an asking price of €35m on the player. That seems on the low side for Jorginho, given the 28 year old has a contract at Stamford Bridge lasting until June 2023.

Corriere believe things will get more serious closer to the time when transfers actually start happening this summer.

Liverpool said to be keen on alternative defensive signing – Relegation...