Chelsea have again been dragged into the Arthur situation, this time by Mundo Deportivo.

With Barcelona considering signing the Gremio player, who has already been pictured in a Barca shirt, it’s a big Catalan news story at the moment.

But Barcelona won’t have it all their own way. According to the claims, Chelsea, Inter Milan and Real Madrid have all contacted Arthur’s agent to ask about conditions of signing the player.

Chelsea also wanted to know if Gremio and Arthur have already agreed a deal with Barcelona, obviously not wanting to get caught up in a saga which has little chance of them becoming winners.

There’s been no formal offers yet, from Chelsea, Barcelona or anyone else, and Mundo 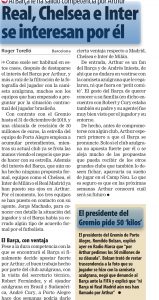 Deportivo quote the Brazilian club’s president as saying the asking price is €50m.

That sounds way over the top for South American transfer fees, but if Gremio can take advantage of competition from Chelsea and others then they’ll hope to be able to push the fee as high as possible.