Chelsea are one of the contenders to sign Thiago Mendes from Lille, according to France Football’s transfer special this week.

The French outlet claims that the Ligue 1 club need money in the winter market, and the midfielder is one of the first options for them to sell. With the Brazilian being worth around €30m, that’s exactly what the club would need to make in January.

There are three interested clubs for now: Wolfsburg, Schalke 04 and Chelsea. Marseille were interested but seem to have turned their attention to other targets, while PSG’s will to sign the player is not so clear.

Regarding the Blues, France Football claims that Mendes would be an ‘additional solution’ to a sector which already have a handful of players. Chelsea are ‘considering the possibility’. 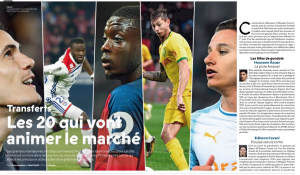 It’s said that Mendes would cost between €20m and €30m ‘unless’ PSG decide they would go for the player. That’s when a whole new auction would start.

This all sounds too convenient for Lille.