AS Roma goalkeeper Alisson Becker has been linked with a move to Real Madrid and several reports indicated that only a fee was yet to be agreed between the two clubs for the stopper to make a switch.

However, no deal has taken place so far as the Serie A club’s director of football Monchi revealed he hasn’t received any bid for the Brazil international.

Marca today reports that Chelsea have now joined the Champions League finalists in the race to sign Alisson. The report claims the Blues are planning to bring the South American to Stamford Bridge.

Chelsea are closing in to beat Real Madrid and Liverpool, with Marca saying ‘Alisson approaches Chelsea’. Roma are demanding €70m to sanction their star’s sale and the west London club are said the ones closest to matching it.

In addition to this, Roma are also willing to give the green light for Alisson’s transfer to Chelsea to take shape.

Real Madrid tabled a €40m bid for Alisson, which was turned down by the Italian capital club. They are far away from reaching Roma’s valuation, which has allowed Chelsea to make an approach to get ahead of them and Liverpool. 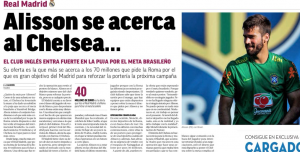 The report claims the FA Cup winners’ approach in signing Alisson will come as good news for Roma and bad news for the competition.

Liverpool are also thought to be willing to go above €40m, but Marca don’t state if they’re prepared to pay as much as the newspaper believes Chelsea are.