Home Premier League Chelsea Chelsea have ‘very clear’ advantage over Newcastle for forward – Have made...
SHARE

Despite denials from those around him, as reported by Le10 Sport, the Italian press are adamant that Chelsea want Dries Mertens and that moves have been made towards getting a signing done.

So much so, in fact, that they have returned ‘overwhelmingly’ to try and convince him to not renew at Napoli and transfer to Stamford Bridge, and are ‘in the running’ to sign him.

Not only that, but Corriere dello Sport explain they have a ‘very clear’ advantage over the rest of the competition, which includes Newcastle United.

The St James’ Park club is currently in the process of changing owners, which has led to a number of rumours surrounding future transfers they could make with their new money. 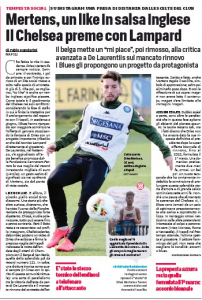 One of those was said to be an approach for Dries Mertens, and while it was plausible, it always felt like the Belgian might not hold a move to Newcastle at the top of his list.

Either way, Chelsea appear to be ahead of any potential suitors when it comes to the diminutive Belgian, while Napoli wait for him to make a decision regarding his renewal.

If he doesn’t choose that route, he becomes a very attractive free agent.

For Corriere, it’s one of two choices: light blue or blue.