Sevilla star Jules Koundé seems to be a target for Chelsea, something that the Spanish press have been covering over the past few weeks.

On Friday, reports stated the Blues will make a decision whether to buy a new midfielder as they continue to keep an eye on Saúl Ñíguez.

These claims are relayed in today’s edition of AS and they add there’s been no advanced negotiations from Chelsea with Atlético Madrid or with the midfielder so far.

The 26-year-old has been on the exit ramp, but hasn’t managed to get a move away from the La Liga winners.

AS also mention Koundé and state the Champions League winners were ‘immersed in the negotiations’ for the centre-back, after completing the signing of Romelu Lukaku.

Thomas Tuchel started Trevoh Chalobah against Villarreal and Crystal Palace, and the manager was impressed with the 22-year-old’s displays. 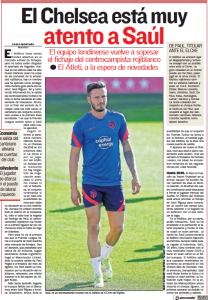 emergence, and despite Tuchel’s stance, AS say the west London club’s board are ‘willing to sign’ Koundé.

With Saúl also on their agenda, it is ‘now in the hands of Chelsea to prioritise’ whether to add the Spaniard to their overcrowded midfield or sign Koundé to strengthen the defence.

Diego Simeone’s side are ‘calm’ with Saúl’s situation, suggesting they wouldn’t mind having him at the club, if he fails to get a move away from Atlético.