With all the talk surrounding the arrival of Romelu Lukaku at Stamford Bridge, players like Tammy Abraham must be wondering about their future.

There’s no denying that the Belgian’s arrival would limit the England international’s game time even more than Timo Werner’s did, and would also trigger a domino effect in the striker market.

Chelsea buying Lukaku would force Inter to find a replacement, with Atalanta’s Duvan Zapata a real option for them.

That would then leave the Bergamo side short up front, which is where Tammy Abraham reportedly comes in.

Gazzetta dello Sport have an article on the matter on Thursday, and explain that Atalanta have no need to sell their striker, meaning they will ask for a lot of money.

Should they sell him, then they would be able to reinvest cash from a 30-year-old into someone younger, like Abraham. 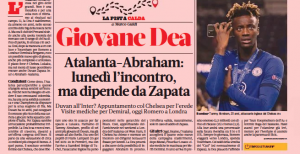 Chelsea, aware of the interest, have reportedly ‘asked for and obtained a meeting’ with the Atalanta brass, ‘scheduled for Monday’.

That’s when the Serie A side will ‘discuss the possibility of bringing in Abraham on loan’, but only in the case of a Zapata departure.

Let’s wait for Monday then.