Andreas Christensen is out of contract at Chelsea in June and his situation at Stamford Bridge has seen him end up on Barcelona’s transfer agenda.

The defender is not close to signing a new contract with the west London club and if there is no change in his situation in the coming months, he can leave the Blues as a free agent next summer.

Wednesday’s edition of Mundo Deportivo explains that within the offices of the La Liga side, it is ‘perfectly known’ why the 25-year-old’s renewal talks with Thomas Tuchel’s side have ‘stalled’.

It’s claimed the Denmark international’s father wants Chelsea to offer his son a ‘renewal premium and also in a single payment’.

These demands have not gone down well with the Champions League winners. The newspaper adds Chelsea are not willing to let Christensen, who is not in the ‘top 5’ players in the squad, tell them how to get things done.

They don’t think he’s a big enough star to justify his representatives making such demands. 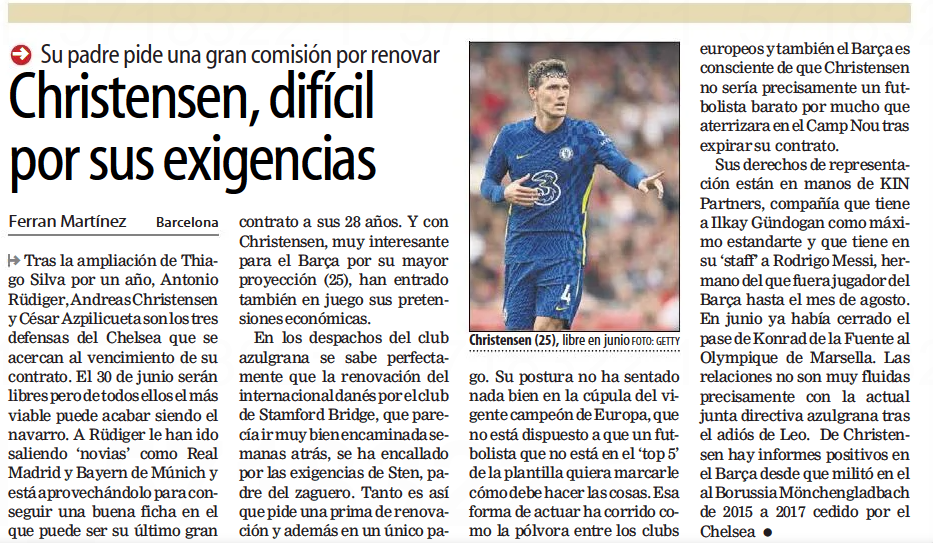 This way of acting from the Dane and his camp has not pleased Chelsea, and therefore, he is now being linked with a move away from the English club.

Barcelona, for their part, are aware the player would not come cheaply, even if he were to join them on a free transfer. Christensen’s demands make it ‘difficult’ for the Catalan club to acquire his services.

The Chelsea man changed agents last month and is now represented by KIN Partners, the agency who have Lionel Messi’s brother, Rodrigo, as one of their partners. Their client list includes Konrad de la Fuente, who left Barcelona for Marseille last summer.

Mundo add the agency’s relationship with Barca is ‘not very fluid’ following Lionel Messi’s exit from the Camp Nou.

These factors would not make it easy for Xavier Hernández’s side to secure Christensen’s services next summer.