As both Pedro and Willian look set to leave Stamford Bridge this summer on free transfers, Frank Lampard is going to need a winger or two for his squad.

The likes of Christian Pulisic and Callum Hudson-Odoi are certainly viable options for the former midfielder, but they tend to prefer the left hand side of the pitch, while the aforementioned veterans don’t.

That’s why a link to Federico Chiesa makes sense, as the young Italian forward prefers playing down the right and is incredibly efficient at cutting in on his left.

Gazzetta dello Sport name Chelsea as one of four clubs (alongside Inter, Juventus and Manchester United) interested in the Fiorentina star, although the Blues do start with one disadvantage.

It’s made clear ‘the idea of the Chiesa family is to stay and play in Italy, especially in a Euros year’, and while the Premier League sides could offer more money, which could, maybe, ‘make him think again’, the trend is for him to remain in the south of Europe. 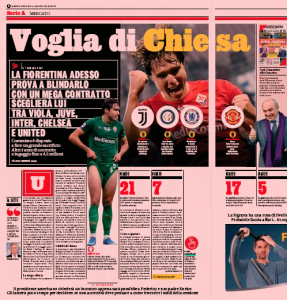 However, ‘the player has not promised himself to anyone’, but should he decide to leave Fiorentina, Rocco B. Commisso, the club’s owner, would be looking for a fee of around €70m.

Affordable as a big one off for Premier League clubs, but in this year’s Covid-19 affected market, it might be a bit much.