The German’s arrival has seen the Blues include Bayern Munich duo Niklas Süle and David Alaba, and RB Leipzig’s Dayot Upamecano on their summer ‘shopping list’.

That’s what has been reported in this week’s edition of SportBild and they add one of the three players could arrive at the London club in the summer.

Upamecano is also on the radar of Bayern Munich and their sporting director, Hasan Salihamidžić, held talks with the Leipzig player’s agent last week.

The Frenchman is represented by an agency named Sports360, who also became Süle’s advisors last summer.

According to the report, there had already been contacts between the agent and Chelsea for the 25-year-old Bayern defender.

Süle is not a regular under Hansi Flick and the player knows those in charge at the club are ‘critical of his fitness level and attitude’. SportBild mentions the two parties must decide whether or not to continue their association after this season.

His contract runs down in 2022 and the Bavarian club want Süle to be sold in the summer, if he refuses to sign an extension. The treble winners, for now, are finding it hard to slap a valuation on him.

The German’s current value as per Transfermarkt is €48m, but the report states a figure of €30m would be the basis of the negotiation. Süle’s camp emphasises that Bayern paid €20m to sign their client from Hoffenheim in 2017.

SportBild explain the ‘triangular relationship’ between Chelsea, Sports360 and Bayern ‘makes it hot in terms of negotiation’.

The magazine further adds: ‘The parties deal with the same numbers, so they know what the clubs are willing to spend – but also what the players are demanding. That is why Chelsea FC has not yet completely written themselves off as a candidate for Upamecano’. 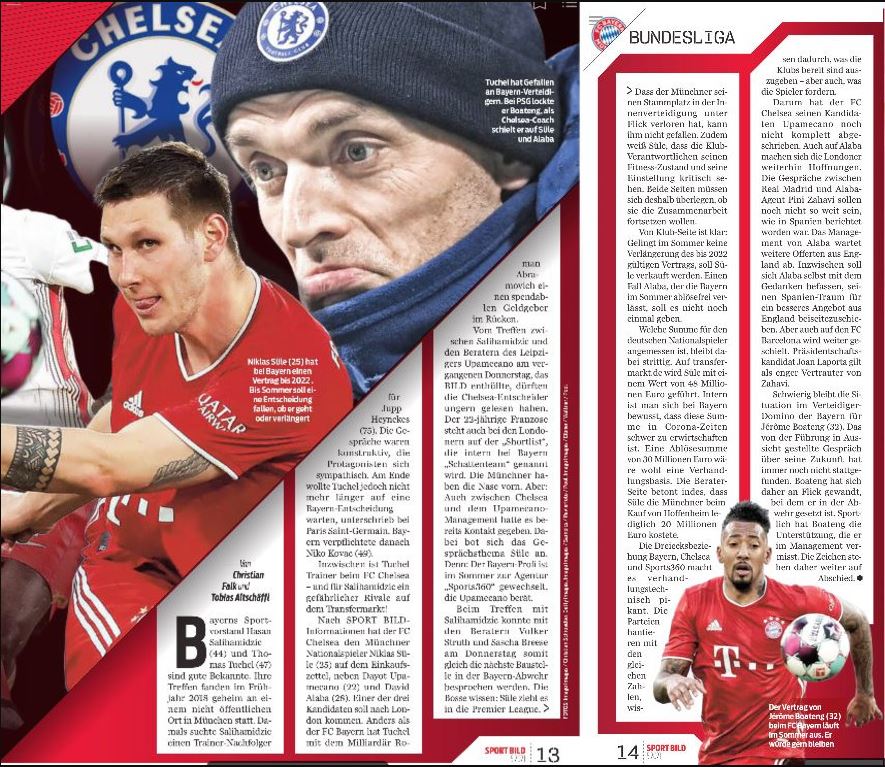 Tuchel’s side also retain hope of signing Alaba on a free transfer. The Austrian’s camp are waiting for ‘offers from England’, amid interest from Real Madrid and Barcelona.

Alaba’s agent Pini Zahavi shares a good relationship with Barca presidential candidate Joan Laporta and if he’s elected, the Catalan club will continue to looked at as a possible favourite destination for the defender.

To sum it up, Chelsea have added Süle, Upamecano and Alaba on their summer transfer ‘shopping list’ and there’s belief one of them could arrive at the club in the next window.