One of four Chelsea players sent on loan to Vitesse in the Eredivisie, Mason Mount has had to be a bit more patient than the others to get his chance, but when he did, he grasped it with both hands.

Brought on against Utrecht at the weekend for the last 16 minutes of the game, the Stamford Bridge loanee scored his side’s equaliser with his first touch of the ball, a moment he told De Telegraaf he will ‘never forget’.

Unfortunately for him, neither of his parents were able to travel to watch the game, which was a stark contrast to his last performance against Swift in the cup, but the Chelsea youngster knows they’ll have been on the couch in Portsmouth keeping tabs on his performance.

He said: “I knew that I had to prove myself this time with a goal or an assist. It’s beautiful that I managed it this time”.

Seemingly thrilled to be getting first team experience after spending last season with Chelsea’s reserves, the 18-year-old has one goal in his mind, and that’s to impress Antonio Conte. 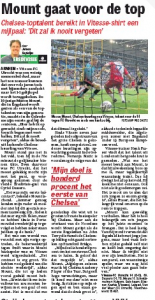 He said: “My goal is 100% to get into Chelsea’s squad. I think that’s possible. Last season I was Chelsea’s Academy Player of the Year, which puts a lot of expectation, but I don’t care about that. I focus on my own game and am used to pressure”.

In fact, it’s this determination to prove himself that has impressed Vitesse’s manager the most, who explained Mount has been ‘angry at me for weeks, but at the same time training hard’.

Taking his frustration out on the pitch rather than off it, the Chelsea youngster was described as ‘terrific’ and a ‘gem’ by Henk Fraser, who is also trying his best to manage the expectations and develop him as best he can.

It seems he could be on the right track.