By now, you’ll all be aware that Alexis Sánchez, who Manchester United offloaded to Inter on loan for the rest of the season, is out injured.

He hurt his ankle on international duty with Chile, and the general consensus is he will be away from the pitch for a good three months, and that’s if he elects to have surgery.

If he doesn’t, his recovery could take an extra month, which is hardly good news for both Inter and the Old Trafford club, who both wanted this to work out well.

After all, the Serie A side are paying a considerable chunk of the player’s wages, while United were ultimately hoping the Chilean would thrive in a league he already knew to then offload him off their books indefinitely once the season was over. 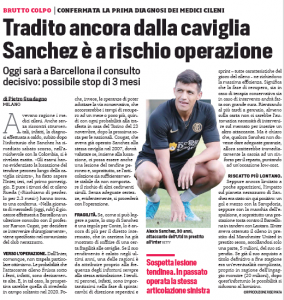 This injury, however, according to Corriere dello Sport, has put a spanner in the works.

The Italian newspaper claim on Wednesday that even before the setback, a definitive purchase was a ‘difficult possibility’, now it’s been ‘reduced to a flicker’, suggesting there is little hope this summer of Sánchez staying in Milan.

Of course, a great second half of the campaign could change all that, but considering how the last 18 months have gone for him, that would be nothing short of a miracle.