Leaving Wolverhampton Wanderers after just six months when he was sent on loan to Fiorentina, Patrick Cutrone probably thought he’d seen the last of Molineux and the West Midlands.

However, despite the feeling the one and a half year deal meant the Serie A side would all but sign him, that hasn’t happened yet, and Gazzetta dello Sport sprinkle the tiniest bit of doubt over his future in Florence.

That’s because the club, fresh with ambition following their change of ownership to Rocco Commisso, want to sign an important name to lead the line, one capable of guaranteeing 20 goals a season, and ‘much will depend on the characteristics of the number nine that arrives’.

Gazzetta state it’s ‘up to [Daniele] Pradè (their director of football) and [Beppe] Iachini (their manager) to decide’. 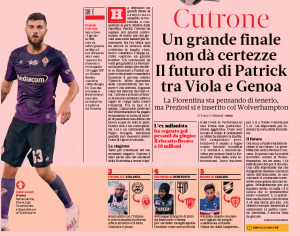 It’s said ‘the possibility he remains in Florence is concrete, in which case the side will pay Wolverhampton the pre-agreed €18m’, but if they don’t, ‘the centre-forward would return to the English club, probably to then leave immediately’ again.

Should that last scenario happen, ‘Genoa would gladly take him’ as well as ‘Serie A clubs of a higher status, with European goals’.

Basically, there are no guarantees here, and a lot seems to depend on who Fiorentina set their sights on to bolster the attack this summer.