Luis Diaz’s potential move from Porto to Everton ‘remains on the table’ on deadline day but is likely to rest on Kylian Mbappé.

That’s according to both A Bola and Record, who both say there is still a chance of the move happening, but it will depend on the Frenchman.

Starting with the latter, who are more positive for Everton, they say that the potential exit ‘remains on the table until midnight’ as there is a chance the Blues could make a late push.

The deal, however, is dependant on what happens to Mbappé. If he were to join Real Madrid, it would start a domino effect as they would target Everton’s Richarlison.

That deal would give the Blues money to match Porto’s €40m asking price for Diaz, which is half of his €80m release clause.

While the Mbappé deal appears to be off, the truth is that Sérgio Conceição cannot yet ‘breathe a sigh of relief’ as negotiations are likely to resume today.

The Porto coach doesn’t want to lose Diaz, but the club need at least €20m to go back into the coffers, and the players they would prefer to sell have no suitors, so Diaz remains on the table. 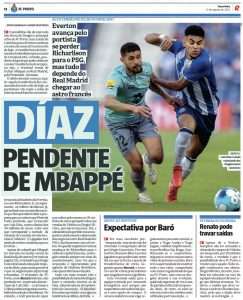 One positive for them is that they will likely know if Richarlison is going ahead of time, as they have a good relationship with his agent.

For those wondering about James Rodriguez, the idea of him going the other way from Everton is ‘becoming increasingly remote’ because he is not a priority target.

That’s Record’s stance, and A Bola say pretty much the same thing, although it is far more negative if you’re an Everton fan. 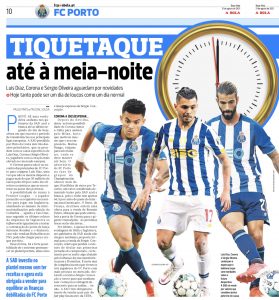 According to their information, Everton ‘seem unwilling’ to math Porto’s demands for Diaz as they don’t want to pay more than €30m for him.

Diaz would love to make the move to England, but the money simply isn’t there to be spent at Goodison Park at this moment in time.

That could change if Richarlison were to go, but at the minute, he’s staying, and so there is a ‘strong possibility’ that the winger will be staying at Porto as a result.