Prior to the weekend, Paris United in France claimed that West Ham were working hard to try and get a deal for Paris Saint-Germain’s Javier Pastore over the line.

The Argentinian has fallen out of favour in the French capital, and talk of a move away has been rife for a couple of years now, with this summer the likeliest time for it to happen.

With just one year left on his deal with the Ligue 1 champions, Pastore is drawing interest from around Europe, with AS Roma joining the Hammers in the race to acquire his services.

According to Gazzetta dello Sport, the Serie A club are ready to offer him an ‘absolute leading role’ in their team via a four-year contract worth €4m/year as the attacking midfielder would be ‘ready to lower his demands’. 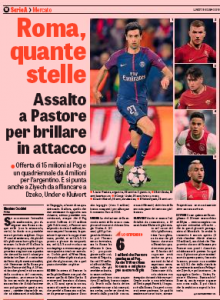 What seemed to be a very difficult deal to pull off just two weeks ago could now ‘materialise’, especially if Paris Saint-Germain accept their offer of €15m + €3m in bonuses.

Of course, West Ham’s interest is also mentioned, as they ‘can offer more to both the Parisians and the player’, who would then have to choose between returning to the league he knows well from his time at Palermo between 2009-2011 and Champions League football, or trying something completely new and moving to the London Stadium.

Taking this even further are TuttoMercatoWeb, who state the talks between Paris Saint-Germain and Roma have ‘undergone further developments over the past few hours’, with an agreement reached at €20m + €5m in bonuses, and the player saying yes to a four-year deal with the option of a fifth at €4m/year + bonuses.