Home Europe Celtic transfer is a ‘game of patience’, player keen on making the...
SHARE

FC Porto’s chase for the Celtic midfielder Olivier Ntcham is now said to be a ‘game of patience’, according to the Portuguese press this Thursday.

Newspaper A Bola writes the player’s agents have already spoken to the Dragons, and the player is keen on moving to ‘a new project’.

With Porto in the Champions League, Ntcham would be interested in making a move to a club where he would have a bigger chance to be called up for the French national team.

A Bola even alludes to the Scottish Premiership’s ‘questionable competitiveness’, claiming that it would be a good deal for the player to move to Portugal. 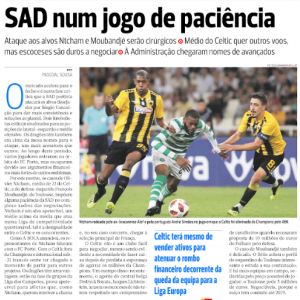 Problem is that Celtic ‘are not an easy club to negotiate with’, even though they ‘would need to sell some players after being knocked out from the Champions League’.

But truth is that A Bola don’t have any info about Porto’s bids for now. It’s pretty clear that the Portuguese champions are keen on Ntcham, but it sounds like they will only make a move if they get a positive sign from Celtic.