Portuguese newspaper A Bola features today a two-page interview with manager Pedro Caixinha, and Rangers and rivals Celtic came up in the chat.

The 48-year-old is currently unemployed after leaving Mexican side Cruz Azul in September, and now plans to take some new challenge for his career.

Before accepting the job in Mexico, Caixinha managed Rangers in 2017. His time in Scotland didn’t last long, but the whole period was covered repeatedly in Portugal.

Caixinha was only asked one question about Steven Gerrard’s side, and even suggested Celtic’s dominance was one of the problems which led to his departure.

“Rangers had just returned to the Scottish Premiership after going down several divisions. In the meantime, Celtic took over everything,” Caixinha told A Bola. 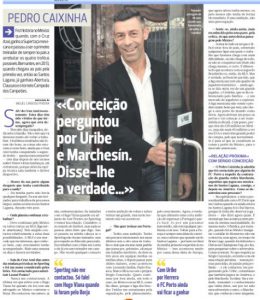 “The president of Rangers is Scottish and based in South Africa. I’ve been with him once or twice, and in the process, something has failed. And we have a responsibility, of course, for choosing players who have not adapted well. But it’s a giant club I’m grateful to have been there.”

In the interview, Caixinha claimed that he should continue to work in Mexico or perhaps move to the MLS, promising some ‘news’ in the next few days. But he also says he plans to work in Portugal again.

A return to Glasgow is unlikely.