Despite being one of the better known sides around the world, Celtic don’t have the income of Premier League clubs, which is why seeing them scout youth teams for cheaper talent isn’t all that surprising.

We say this because one of Brendan Rodgers’ men was said to be present at a UEFA Youth League game on Wednesday evening in Croatia to watch Dinamo Zagreb beat Manchester City 1-0.

The information comes from 24 Sata, who explain Atlético Madrid, Valencia, Benfica, Real Sociedad, Eintracht Frankfurt, Wolfsburg, Lille, Paris Saint-Germain, Manchester United, Inter Milan and Celtic were all present at the game to see a ‘number of gems’ on display.

A number of players in the U19 squad were said to be looking to prove themselves, such as Antoni Marin, Tin Hrvoj, Josip Šutalo and Roko Jurišić, as they try and follow in the footsteps of Bartol Franjić and Joško Gvardiol, who have both already made some first-team squads this year. 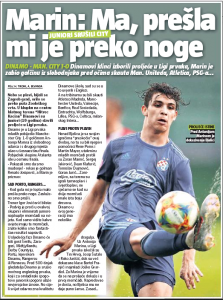 The Croatian newspaper don’t reveal who Celtic were interested in bringing to Parkhead, but you don’t travel to that part of Europe just on a whim.

That means there’s someone in that team they’re keeping an eye on.

Now we just need to work out who.