Most Portuguese newspapers are today reporting how close Andraz Sporar is to moving from Slovan Bratislavia to Sporting, although Celtic remain a worry.

The Lions are said to be sorting the last details of a move after negotiating for the striker for a long time.

A Bola claims the Lions should still worry about competition, especially with Celtic and Bristol City still interested in the player.

They say the Scottish and English clubs are ‘attentive’ to the situation, since the player continues to be on their wish-list. 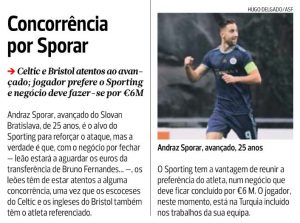 Sporting seem really close to finding a deal, so perhaps these claims are just to add some drama.

A Bola says the Portuguese side should be finalising the move for €6m. Another advantage that the Lions have over Bristol City and Celtic is that Sporar’s preference is for Sporting.

So the story pretty much sounds like A Bola want to show that Sporting weren’t alone in the race, and have shown some strength to win the competition for the striker.

Chelsea ‘position themselves’ for signing – Player can’t rule out ‘crossing...

Claim from Greece that Wolves agreed deal for signing on Monday...