Kristoffer Ajer changed agents last summer and he did it with the hope of getting a move away from Celtic.

Unfortunately for him, the defender couldn’t find a way out of Celtic Park and after having finished the season with the Hoops, he will have a fresh opportunity to changes clubs in the coming months.

Ajer is not lacking suitors as he’s been linked with moves to a handful of clubs in England and Germany. For the latter, Bayer Leverkusen are credited with an interest and this has been reported by multiple sources in the past few days.

Kicker also explain Bayer Leverkusen have an interest in the Norway international and according to their information, the 23-year-old is a ‘serious candidate’ for the Bundesliga side this summer. 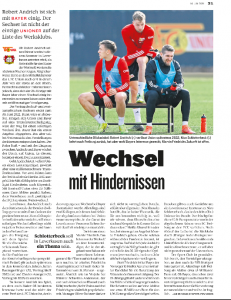 Ajer has over 12 months left on his contract at Celtic, and a failure from the Bhoys to cash in from his sale in the summer could see them part ways with the centre-back for nothing in 2022.

The Celtic defender is ‘considered a leader’ and the German magazine adds the Hoops hope to earn around €15m from Ajer’s sale.