Brought in to help the fill the void left by Moussa Dembélé, Odsonne Edouard has been a more than capable replacement for the Frenchman, earning himself a permanent transfer to Parkhead after a positive loan spell.

Making 52 appearances in all competitions last season, during which he scored 22 goals, the striker has continued his good form in the new campaign already, and apparently attracted interest from elsewhere.

According to Gazzetta dello Sport, the France U21 international is on a list of players Lazio are looking at, as they consider the purchase of a new striker should they sell Sergej Milinkovic-Savic before the end of the transfer window.

Since Felipe Caicedo is remaining at the club, it isn’t the most pressing of needs, but if they get the money, it’s something they will consider.

The name at the top of their wishlist is SPAL’s Andrea Petagna, but with a price set at €25m, he’s a bit too expensive for them. 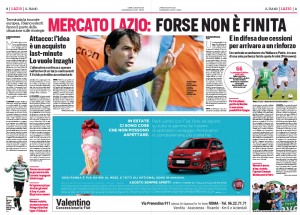 This interest is also briefly mentioned in Corriere dello Sport, but they make a point of pointing out what they probably are: just rumours.

At this point, it seems extremely unlikely Neil Lennon and co. would consider selling the 21-year-old, who appears central to the club’s plans going forward, and a lot of money will likely be expected to change their mind.

Furthermore, if Edouard doesn’t try and force his way out like Dembélé did, there’s even less reasons for Celtic to accept any proposals before the end of the window.